I promised myself this summer I would resume writing in this space when it turned to August. And I promised myself when I did I would pay tribute to my friend Chris Cox, who died on June 2.

Chris lived in Acton, a suburb of Boston. A couple of summers ago when we were in Boston we set up to meet in Cambridge, where, inevitably we would end up at John Harvard’s Brewery and Ale House. As we walked through Cambridge, out of the doorway came a guy with his hat down low, and he started pacing my wife, Brenda.

“Got any loose change? C’mon lady, any spare change?”

She was the last to realize it was Chris acting like the bum. The rest of us were cracking up as Chris worked her over. Damn did we laugh.

We were friends for 28 years; two guys who threw down plenty of drinks together, laughed hard at a lot of little things, went some cool places together and started and ended most conversations by saying “Turbo!”

Chris was a writer and simply put one of the best guys ever. His second book, A Good Death, came out this past winter, and is a great murder mystery set in Thailand.

His first book, Chasing the Golden Dragon, Into the Heart of the Golden Triangle, was about his trip into Burma to meet the warlord Khun Sa and trace the origins of heroin from the poppy fields to Boston.

He had finished writing it when he and I were camping in Utah in 1995. We talked about it and he told me some stories and it seemed neat. Then I read the book and couldn’t believe all he’d left out, especially the parts where his life was truly in danger.

Anyway, we met when I got to Baton Rouge in 1984. We became fast friends, but he ended up moving to Massachusetts. His jobs included working as a reporter at the Lowell Sun and the Boston Herald, which gave him the freedom and flexibility to become the fantastic travel writer he became. My kids, who are grown now, lived in the Boston area for a few years in the 1980s and I would always stay with Chris when I visited.

In the 1990s, he and Maria came to New Orleans in the spring a few times for JazzFest. In 2004 they and Tim, then 9, came and spent a few days with us in Italy while we were there.

Three summers ago he met Brenda and me in Portland, Maine. That night he complained about how tired he was the night before playing basketball and how he wasn’t himself lately. I gave the old, “Hell, no, you don’t want to go to a doctor or anything like that” speech.

The next week he took my advice and the news wasn’t good. That was his first diagnosis of multiple myeloma; a nasty cancer that he beat for a while but came back and ultimately killed him.

Over the course of the next few years he grinded. Grinded as a writer. Grinded as a cancer patient. Grinded hard for his family. We talked a lot and he always was honest about what he was going through.

On a Tuesday, this past May 21, I called him in the hospital where he’d been way too long. Maria answered. I knew from that conversation that time was short, even if Maria didn’t say it in as many words. I just knew and got a plane ticket for three days later. I wasn’t going to allow myself to say after, “I should have gone.” but didn’t.

Luckily my son, Kirk, and his wife, Lindsey, live in suburban Boston and they made visiting Chris that much easier.
I went to the hospital that Friday night and knew that the next day I would see Chris for the last time. Even that night, Chris hadn’t lost his sense of humor, making me laugh more than I deserved. Among the subjects that came up were nutria, and I still smile at the thought of him making a face like a rodent despite having an oxygen tube in his nose.

You should know that Chris ran the hurdles at the University of North Carolina. You should also know that had I ever been on Who Wants To Be a Millionaire, he would have been one of my lifelines. The guy knew more about more things than anyone you ever met.

He loved sports. The last time we went to a game together, we saw the Celtics, and after I got home I sent him a picture we’d taken together. “Does chemo make me look fat?” he wrote back.

Chris also sent postcards from the road. Always funny postcards with handwritten notes. I have a stack of them and they fell out of Chasing the Dragon when I opened it a little while ago to check on the spelling of Khun Sa. Khun Sa, by the way, gave Chris a sword and told him to use it for passage in the future. Sort of a calling card, if you will. It hangs on the wall in his office.

Later this month, Tim is going to be a freshman at Yale, where he will run track and compete with the brightest and the best. I look forward to seeing him run next spring. He’s a great kid who will do well.

And so will Maria, whose efforts as a wife to Chris the past year are hard to imagine. Few of us could have handled what she did as well while all the time being a great mom, too.

Anyway, there is a beer maker in Louisiana called Abita, which makes a dark called Turbo Dog. We both like it and somehow, way back when, when one of us called the other, we started the conversation by saying “Turbo!” And when the conversation finished, it ended with “Turbo.”

On Saturday, May 25, Tim came to the hospital and we got to visit. Maria and I shared a few tears. And then Chris and I got some quiet time. I told him he was one of the best friends I’d ever had in my life. He said simply, “This really sucks.”

We laughed through the tears and a long hug, which, I might add is not easy when one of you is wired and tubed up in a hospital bed. We told each other how much we loved each other and I got up to go.

Almost simultaneously we said, “Turbo!”, slapped hands and I left.

Chris wanted to leave the hospital and be at home, which he finally got to do a week later all because of the efforts of Maria. The next day he died at 57. The world lost a mind and man it cannot replace.

It’s been more than two months and there have been very few days in which I haven’t thought of Chris. Especially on July 3, in Moab, Utah, when, with Brenda, Kirk and Lindsey and our friends Phil and Terry, I hiked up to Delicate Arch in Arches National Park.

Chris and I hiked to that same spot on that aforementioned trip to Utah on a day in which it rained, we went to a brewery and then suddenly it cleared up and we staggered up the trail. It’s a hard hike but harder when you’ve had a few.

I went back twice after that, once with my daughter, Stacey, in around 1999, and then again in 2002 with Brenda.

This time it was different, because as I sat there looking at Delicate Arch it suddenly became a time to reflect. I hoped Chris would have been happy I was there and thinking of him. I laughed at a few memories, and then said to no one in particular, “Turbo!” and joined the group for the hike back.

Chris and Lee at Delicate Arch – Arches National Park – May 1995 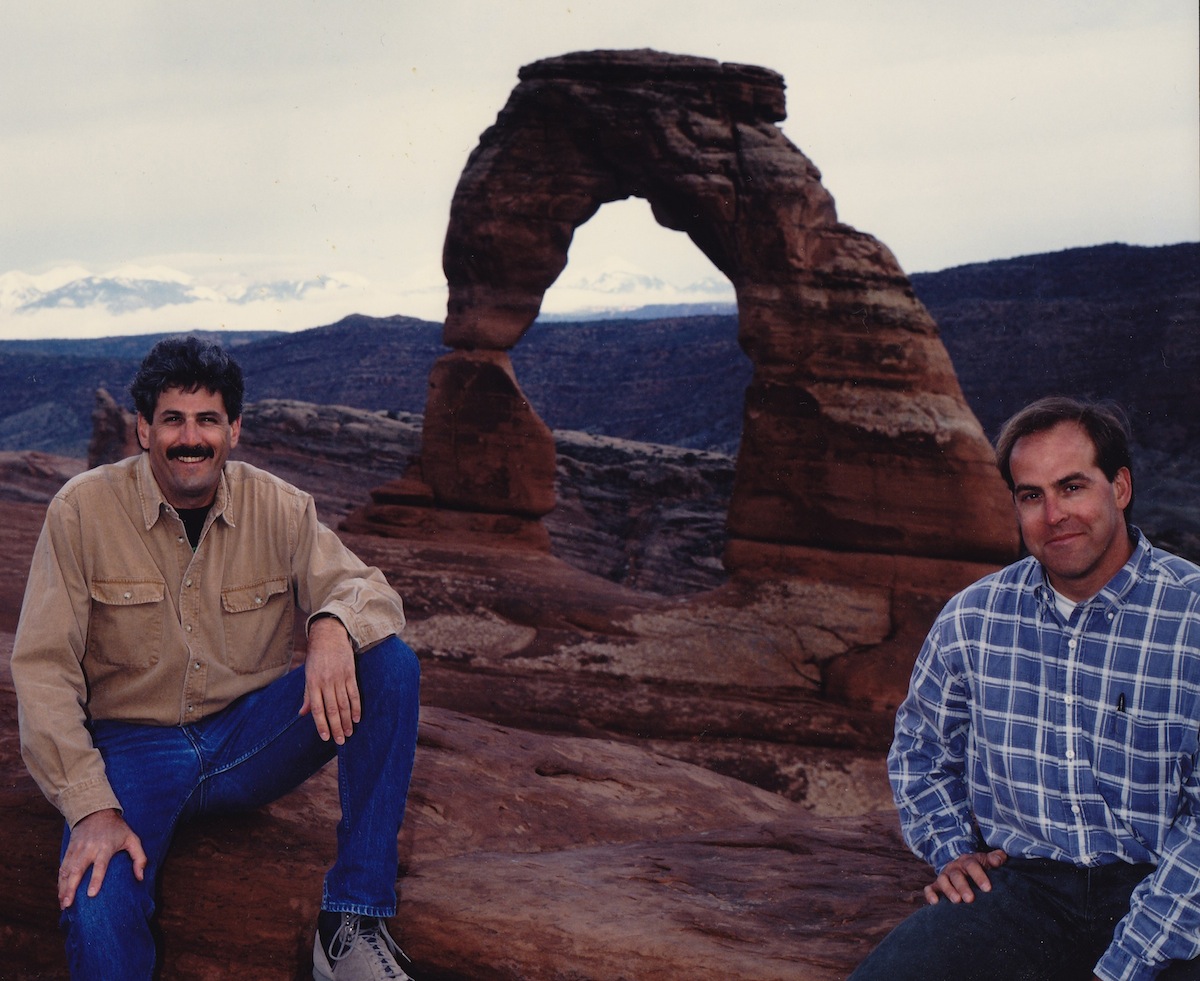 Posted by: Lee Feinswog
View more posts
The Swog Blog: Andrew’s Take on LSU
Pay them. Not a lot, but pay them.

How perfect to write a 2013 retrospective four days into 2014. No sense starting a…

Joe Dean would have loved it

Mardi Dean had to smile through her tears. “Dad would have loved it,” she…

Chavis, Cameron and Miles on the show this week

We gained an hour today. I’m going to spend part of it waxing poetic and…

I’m in Palm Coast, Florida, at an all-too-familiar-but nice Fairfield Inn, where I stay when…